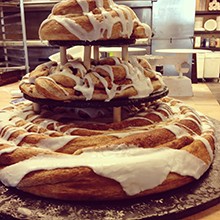 Bakers at House of Bread are preparing to take on their second 100-pound cinnamon roll Saturday. The community is invited to watch the event and eat the confection. “They’ll see us putting it together on the table and how it all comes together,” owner Tom Fitzwilliam said.

Bakers will begin mixing the dough at 8:30 a.m. The rolling and forming of the oversized confection is expected to begin around 10 a.m. Then, four or five bakers will work to put the roll into the ovens for baking. It takes one person on each corner to move it from the table to the oven, Fitzwilliam said. “The scary part is taking it out of the oven,” he said.

The roll will bake for about 30 to 45 minutes and be cut into pieces for everyone to enjoy. He said baking the oversized cinnamon roll is a tradition. Sheila McCann, founder of House of Bread, said the event is something her company likes to host in each community. “It’s our way of connecting with the community,” she said. “People like to see it, and it’s exciting and really visual. It’s a good time to be had by all.” While the cinnamon roll is baking, there will be mini cinnamon rolls available and coffee to go with it.

“It’s awesome to see it come out of the oven,” he said. “Everyone will want a piece of it.” McCann said customers can expect to see the roll again in the future or other large baked goods. “Everyone loves cinnamon rolls. We’ve also done large loaves of bread and other things,” she said.

© 2021 HOUSE OF BREAD. ALL RIGHTS RESERVED.
SITE BY US-Web-Design.com